I am writing to you concerning the announcement that the Government of Canada is allowing eight additional airports to accept international passenger flights.  Unfortunately, Windsor International Airport (YQG), was not on the list. This has created significant confusion and disappointment that YQG was not included since the expectations were that this border gateway airport was going to be approved before the US-Canada border reopens to non-essential travel on November 8. This communication is not an expression of mere disappointment but rather the need to identify the reasons why YQG was not approved and to rapidly correct this situation before fundamental market structure damage becomes permanent.

In 2019 YQG, which is owned by the City of Windsor, had its highest ever passenger volume year- serving over 383,000 passengers – a 300 percent increase in volume from 2009. Beyond passenger traffic the airport has become a logistics air hub for shipments from the local large and growing greenhouse industry and the advanced manufacturing sector. Additionally, the facility has built up a significant private aviation endeavour that has numerous providers servicing the workforce of the automotive, tool, die, mold, and the related manufacturing sector on needed and rapid business travel. Furthermore, a large aircraft maintenance provider operates at the airport servicing the fleets of all national air carriers.

As you are aware, due to the closure of international passenger traffic at YQG, the City of Windsor, has suffered significant economic repercussions. Residents have had to travel hours to alternative gateways to travel and business has been lost due to the complications of connections to supply and demand issues.  This has impacted the local vendors of the airport that provide private aviation services to the business workforce. Accordingly, this has led to large revenue losses for the City of Windsor as the owner of YQG.

An additional concern is that as the Canada-US Border reopens to non-essential travellers on November 8, the local air passenger market will be further distorted to the potentially permanent detriment of YQG. In pre-pandemic times, YQG competed with Detroit-Wayne Metropolitan Airport (DTW) in Michigan, which is one the busiest in North America, for air passenger customers from local Windsor area residents. Once the border re-opens, local air passengers will use DTW as their origin airport rather than travel to Toronto Pearson (YYZ), as they been forced to do during the pandemic. This will damage the more than a decade long work YQG has done to not only sustain its market position but to more than triple its share in direct competition with a far larger competitor less than 30 minutes away.

For these reasons, the residents and the municipality are owed a detailed explanation for the decision and what can be done immediately in order allow international air passenger service to be restored. My riding of Windsor West hosts four border crossings including the Ambassador Bridge, the Windsor-Detroit Tunnel, the freight railway tunnel, and the Detroit-Windsor Truck Ferry. These facilities provide access to the United States market on a 24/7 basis reaching over $1 billion a day approximating 40 percent of the trade between our two countries. Additionally, thousands of people cross the border daily during the pandemic who work Michigan as healthcare workers and in essential services such as power systems, railways, truck transport, ferries, and air crews. As a community we handle complicated border and customs logistics, including public health measures during the pandemic, as a competitive advantage.

Furthermore, the continued closure of this service will exacerbate the financial repercussions and there is the need to know what your Government plans to do to compensate those impacted, especially the municipality as it effects all city residents. This is a reasonable expectation and has been common practice when the Federal Government makes decisions that impact other businesses, provinces, and municipalities.

Finally, I would also like to note that this decision will also impact the position of NAV Canada. Although you and your Government ignored taking a position on my previous solution to prevent closures of airport towers, I am resubmitting this legislation in this new Parliament.  I hope that you re-consider your position and would be pleased to meet you to discuss a way to proceed.

Thank you in advance and I look forward to the explanation for the decision and your cooperation to remedy the issues required to restore international passenger service to Windsor International Airport. 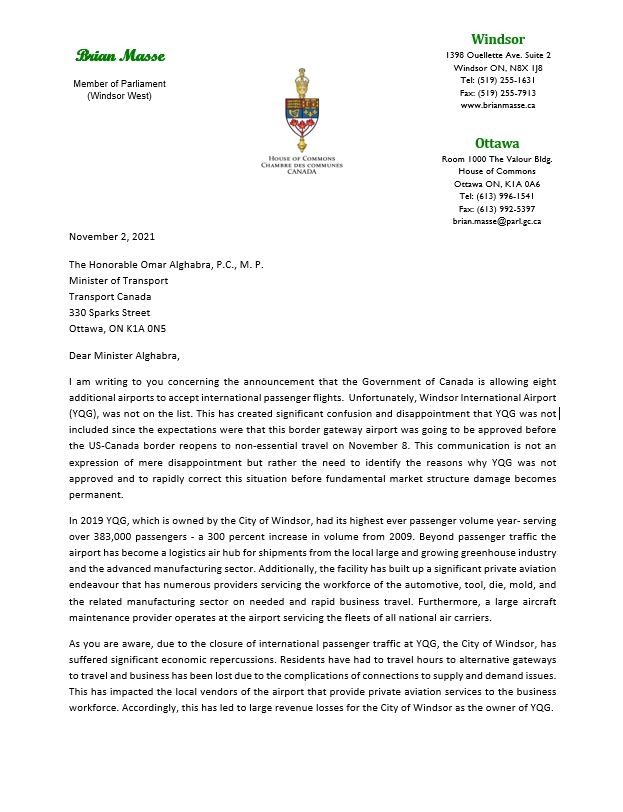 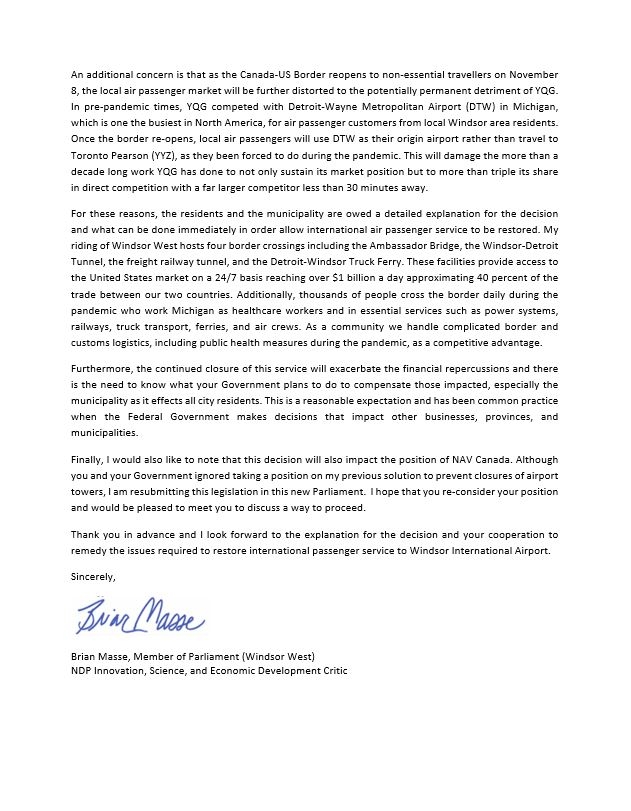