WINDSOR, ON – Windsor West MP Brian Masse today called on the Liberal Government to act and increase their zero-emissions vehicle incentive for Canadians to match that of the proposal announced today in the United States’ Inflation Reduction Act. The US has proposed to keep the tax incentive for Americans $7500 if the battery components are made, mined, or processed with North American critical minerals.  They also proposed a new $4000 USD incentive for Americans purchasing used electric vehicles.

“With the current inflation rate so many Canadians are just trying to meet ends meet and electric vehicles are not a priority if you cannot put food on the table, pay for prescriptions or pay rent,” wrote Masse. “I have asked the Canadian government to match the US proposals for electric vehicles as a start in working towards this government’s 2026, 2030, and 2035 light-duty zero-emission vehicles (ZEV) sales targets. $5000 is not enough,” stated Masse.

Masse asked the Government for three action items including, increasing the rebate for Canadian-made vehicles to match the US rebate, introduce a new $4000 credit for Canadian consumers looking to purchase used electric vehicles, and call an immediate meeting to the Canadian Automotive Partnership Council (CAPC) to create a National Automotive Policy that considers the constantly evolving automotive industry as a whole as we move into the future.

“I commend the Americans for recognizing the importance of the North American automotive industry in this new proposal which will include Canadian batteries and vehicles including our own Windsor-built Chrysler Pacifica,” said Masse.  “I hope the Canadian government will see the need for action to help Canadian consumers and for devising a long-term plan for the industry,” he stated.

A copy of Masse’s letter is attached. 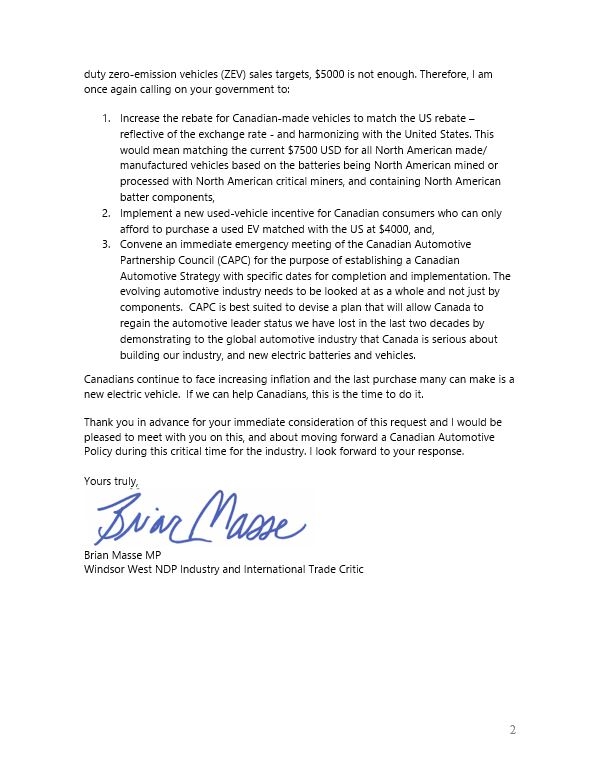