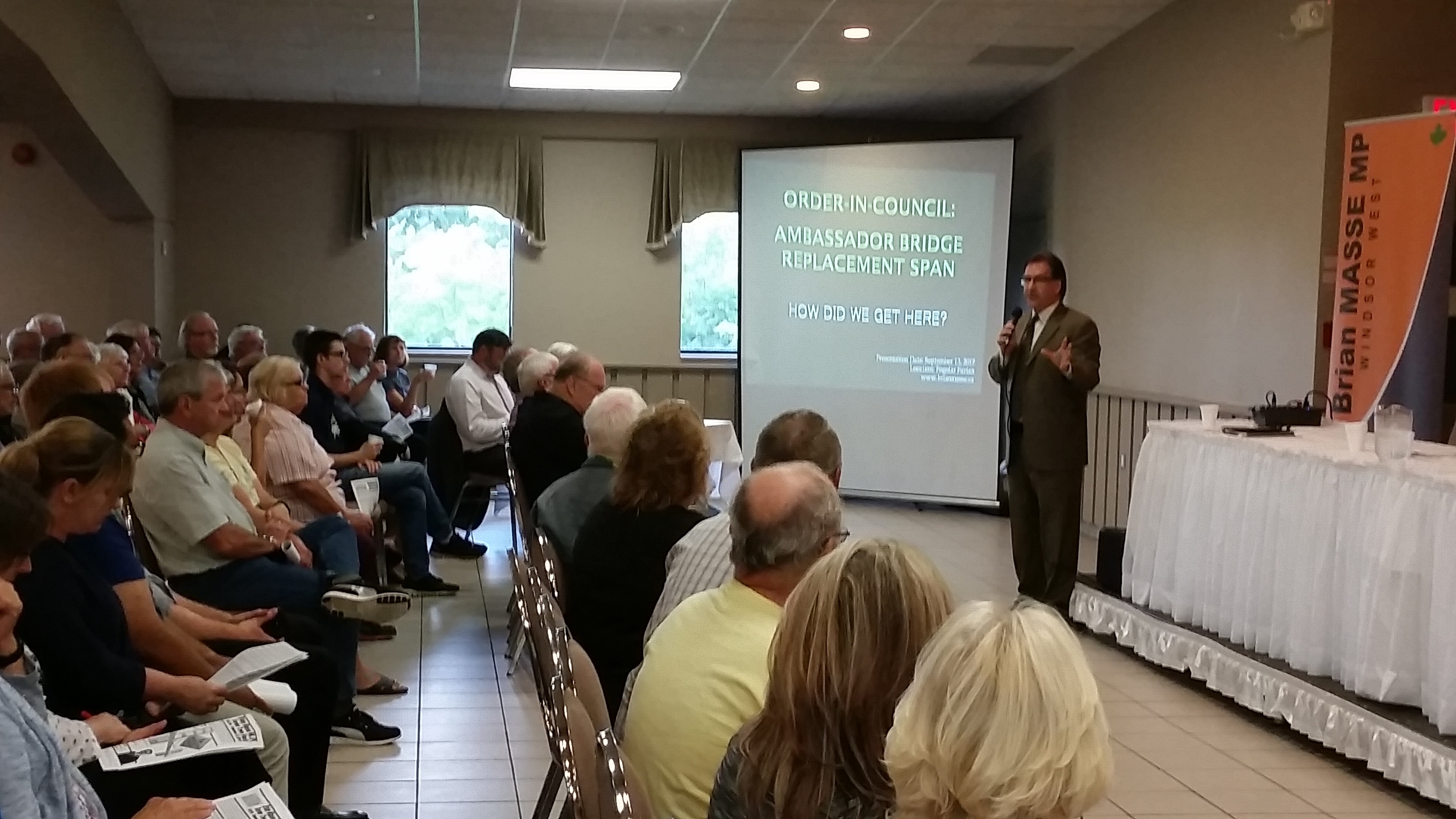 Recently our community learned that the Government of Canada, through an Order-in-Council (OiC) decision has approved a replacement span for the Ambassador Bridge. The announcement was disseminated through a departmental press release and included several ‘Terms and Conditions’ that the Canadian Transit Company (the company that owns and operates the Ambassador Bridge) must respect as it proceeds with their replacement span project.

The timing of the government’s decision, as well as some of the key aspects of the OiC ‘Terms and Conditions’ raised several questions from residents and stakeholder groups across the region. To further the community’s understanding of the decision and to identify key concerns, I chose to organize a public meeting.

At the public meeting I sought to bring together stakeholders from across the community to help to provide answers and listen to residents. I was joined by my Federal Caucus colleagues MPs Cheryl Hardcastle (Windsor Tecumseh) and Tracey Ramsey (Essex) as well as MPP Lisa Gretzky (Windsor West). Our panel also included Matt Marchand – President and CEO of the Windsor-Essex Regional Chamber of Commerce and Brian Hogan President of the Windsor District Labour Council. In addition the City of Windsor was represented in the audience by the Mayor’s Chief of Staff-Norma Coleman.

The meeting featured a short power point presentation that put together a number of different facts connected to the Ambassador Bridge Replacement project, attendees were also provided with the Government’s Order-in-Council approval document including the ‘Terms and Conditions.’  The presentation – linked here below – is by no means exhaustive but summarizes many different aspects of this decision.

The panel took written questions from the meeting attendees. Time did not permit a full examination of every question submitted. However, I have posted them here and will endeavour as we move forward to answer them either directly or by bringing them forward to the Minister.

A point that re-iterated throughout the meeting was the importance of ensuring that we continue to be vigilant as a community with respect to our border. This includes ensuring that community impacts are mitigated with respect to the Ambassador Bridge Replacement span project but also continuing to ensure that the Gordie Howe International Bridge project proceeds.

Click the link below to view the presentation I did at our public meeting:

Recently I had the opportunity to debate the Government on the Ambassador Bridge Replacement Approval. Click on the link below to see the entire exchange:

I recently wrote the Minister of Transport about this decision. Click on the link below to see the letter:

If you would like to get Border updates from my office email me with the simple message: “Hi Brian, Please add me to your border list.”